Most Affordable Online Master’s in Mathematics 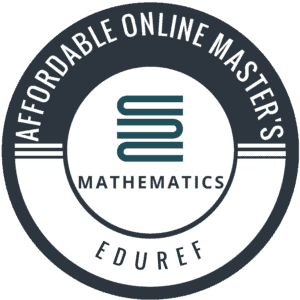 A Master of Mathematics (MMath) degree is the mathematical equivalent of a Master of Arts (MA) or Master of Science (MS). If you want to enhance your knowledge in pure mathematics, or if you wish to specialize in applied fields such as statistics, engineering, and computer science, this degree may be right for you.

All schools considered for these rankings

The university was founded to help combat the high rate of college graduates leaving the area. The University intends to serve as a primary school for low-income and first-generation college students. Its initial tuition fees are about $5,500 less than the university’s flagship Austin campus and $4,000 cheaper than the University of Texas-El Paso.

The Mathematics Department of The University of Texas Rio Grande Valley offers a Master of Science degree in Mathematics. The program has a diverse set of options for concentrations, and students are able to specialize in an area that matches their interests and career goals. Graduates of the program go on to work in a variety of fields, from banking and insurance companies to the petroleum industry. There is also a high demand for mathematics instructors at all levels, including both secondary and post-secondary institutions.

#2 The University of West Florida

The University of West Florida (UWF) is a public institution located in Pensacola, Florida. It was founded as a two-year night school by the Florida Legislature in 1957 and became a four-year institution in 1967. UWF is home to nearly 12,000 students each year and offers more than 100 majors for undergraduate study. It also sponsors a large number of graduate programs through the University of West Florida Research Institute.

UWF has more than 200 buildings, with the primary campus located near downtown Pensacola. Other UWF grounds include a marine science station on Santa Rosa Island and the UWF Historic Trust, a museum system that includes Fort Pickens in Gulf Islands National Seashore. UWF is one of four universities in Florida to have a primary campus located on the coast of a gulf or ocean.

The Master of Science in Mathematics at the University of West Florida is a 36-hour course primarily for those who have an undergraduate degree in mathematics or majors in engineering, computer science, or physics. It offers a major and minor program with courses designed for professionals from diverse fields such as industry, business, and government.

(CSUF) is a public university created in 1957. CSUF has grown to be one of the most extensive public universities in California. Cal State Fullerton is located in Orange County and has about 40,000 undergraduate students enrolled with the school. Unlike other colleges, Cal State Fullerton is divided into eight different schools that offer over 100 degree options. Some of the more popular majors that students at CSUF choose from include Business Administration, Nursing, and Communication.

The University of North Alabama, also known as UNA, was founded in 1835 and is a public, four-year university in the northern region of the state. It is located in Florence, Alabama, and offers a total of 28 bachelor’s degrees and 12 graduate degrees. UNA has been granted Level VI status from the Carnegie Foundation for the Advancement of Teaching which is designated for colleges that offer a range of research opportunities.

The campus has several buildings with statues and fountains scattered around the courtyards. The most notable building is one of the tallest towers in Florence, built in 1894 at 206 feet tall. The tower was built as a memorial to Colonel George Huguley, who wrote the first history of Florence and also served as a major in the Alabama regiment during the Revolutionary War.

Western Kentucky University is a public university that was founded in 1906 in Bowling Green, Kentucky. Formerly known as Western Kentucky State Normal School, it became a university in 1951. WKU is home to 16 colleges and schools with the most popular being the College of Informatics and Technology.

The Indiana State University has been around since 1865 when it was established as the Indiana Normal School in Terre Haute. The school grew from a normal school to a teachers college and finally to a four-year liberal arts college before becoming a university in 1965. In the past fifty years, the Indiana State University grew from being one campus to having sixteen regional campuses across the state, including metropolitan Indianapolis.

The Indiana State University is supported by the State of Indiana and the taxpayers for higher education through state appropriations. Since 2008, the university also receives funding from the Higher Learning Commission in Chicago which accredits most educational institutions in states such as Indiana, Michigan, and Illinois. The Indiana State University has been named by the U.S. Department of Education as a national center for academic excellence in Information Assurance Education and is designated by the National Security Agency (NSA) and Department of Homeland Security (DHS) as a Center of Academic Excellence in both Information Assurance and Cyber Defense training.

Indiana State University offers an online Master of Science degree in Mathematics. The online mathematics school is designed for people interested in the field of math who cannot attend on-campus courses due to geographical distance or other reasons.

The student body consists of over 12,000 students from all 50 states and 89 countries. WTAMU offers more than 150 undergraduate and graduate degree programs in the arts and sciences, business, education, engineering, human services, and nursing. The university is accredited by the Southern Association of Colleges and Schools Commission on Colleges to award bachelor’s, master’s, and doctoral degrees.

Fairleigh Dickinson University-Metropolitan Campus is a public university located in Teaneck, New Jersey. The university offers undergraduate and graduate degrees to its students. The university was founded in 1942 as “Fairleigh Dickinson College” on Florham Campus located in Madison, New Jersey. The campus consists of three distinct and separate locations: the former estate gardens and buildings belonging to Florence Vanderbilt, a large park-like arboretum, and a series of carriage paths.

The university is known for hosting the East Texas historical and genealogical events every year. Furthermore, SHSU is a research institution that provides several programs in various fields including Criminal Justice, Education, Nursing, Business Administration, and Human Sciences. The university also puts an emphasis on its agricultural program. All of these factors have contributed towards the recognition of SHSU as one of the best universities in the state of Texas.

Emporia State University, also known as ESU, is a public university located in Emporia, Kansas. It was founded in 1882 as the Kansas State Normal School and is the second-oldest public university in the state of Kansas. The university offers more than 100 undergraduate majors and over 70 graduate programs.

ESU is a great choice for students who want quality education in a friendly, small-town environment. The university has a strong tradition of academic excellence and offers many opportunities for students to get involved. With over 100 undergraduate majors and 70 graduate programs, ESU’s tuition is very affordable.

The Masters in Mathematics degree from Emporia State University is a great way to prepare for a career in mathematics or to continue on to pursue a PhD in mathematics. The program has a strong emphasis on practical applications of mathematics and provides students with the skills and knowledge they need to be successful in their chosen field. Faculty at ESU are experienced professionals who are passionate about teaching and are dedicated to helping graduate students reach their full potential.