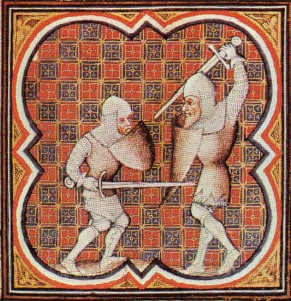 A Translation of Fillipo Vadi’s 15th century Fighting Manual
A Report on the First Annual Swordplay Symposium International
Schola St. George established!
How to Study Historical Swordsmanship
Talhoffer’s Fechtbuch by VS Books–Review
Historia (What is a Fechtbuch?)–Greg Mele

Greetings and welcome to the Swordsmanship Index of the KCT Resource Library. Herein, we hope to introduce you all to the wonders of Historical European Swordsmanship (HES).

When I first began to study the sword, both through modern, sport fencing, and the rattan fighting of the SCA, I was constantly told by “authorities” that, prior to the rapier, there was no surviving information on how the Medievals trained or fought with sword, lance and axe. Later, while in college, I stumbled upon Jackson’s Three Eliazbethan Fencing Manuals, which contained a interesting work on the sword, staff, bill, dagger, and buckler: Brief Instructions on My Paradoxes of Defense, written c.1605 by George Silver, gentleman.

Since that time, when finding a copy of Silver seemed like such a unique triumph, there are over half a dozen websites that have Silver’s work transcribed on-line. Literally dozens of manuals of arms from the 14th and 15th centuries have been found, and we have leads for easily as many more. In this “Renaissance of the sword” we are now seeing, a variety of groups have sprung up, worldwide, dedicated to the study of these ancient Western martial arts.

This site is dedicated for those interested in European swordsmanship as a martial art, an art as old as any tradition of the East. Whether you are an Eastern martial artist, a re-enactor, a living history enthusiast, or a Western student of the sword, you will find a warm welcome here, so long as you are
willing to lay assumptions and egos aside as you come in.

Comments, questions or suggestions? Feel free to contact me or any of the other Editors.

The mind of man a greedy hunter after truth, finding the seem truth but changing, not always one, but always diverse, forsakes the supposed, to find out the assured certainty, and searching everywhere save where it should, meets with all save what it would. Who seeks & finds not, seeks in vain. Who seeks in vain, must if he will find seek again, yet all in vain. …. If then he thrives not, he tries another way. …But though we often chop and change, turn and return, from ward to ward, from fight to fight, in this constant search, yet we never rest in any, and that because we never find the truth, and therefore we never find it, because we never seek it in that weapon where it may be found.
-George Silver, Paradoxes of Defense (1599)

On Winning by Steen Jensen
How to Study Historical Swordplay by Brian Price
Historia (What are the Fechtbuchs?)  by Greg Mele