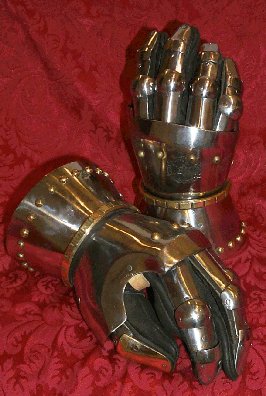 These gauntlets have literally been in a nearly complete stage for more than seven years, taking up space on a shelf or in various boxes as the workshop was stored. They will fit a medium/small hand, with average length fingers, and feature a number of interesting features.

Hourglass gauntlets were the main hand defense during the latter half of the 14th century. Brass effigies, funery gisants, tapestries and manuscript paintings all show the uniform, distinctive hourglass shape formed between the metacarpal (the part that covers the back of the hand) and the cuff. Frequently they are adorned with all manner of latten (brass or bronze) adornment, starting with simple domed rivets and extending to elaborate cast, filed and engraved edging. The metacarpal itself is often fluted with distinction, raised areas over each knuckle defining the shape (unlike this pair).

Sadly, few examples of this fine design remain. Notable exceptions are the gauntlets of the Black Prince, preserved in Canterbury Cathedral; the gauntlets in Castle Churburg loosely associated with the famous #13 transitional harness (the real gauntlets that match are in the Bargello Collection–the engraving matches), and the aforementioned pair in the Bargello.

This pair was to have gone with a Milanese harness dating from the mid-15th century. While the more usual surviving gauntlet for the period is a two or three-piece mitten gauntlet, these were chosen to match the examples shown in the three-part Rout of San Romano, by Uccello, where hourglass gauntlets are plainly visible on the hand of every combatant in the battle. In order to keep the style from jarring too much with the smooth lines that characterize the Missiglian masters, the flutes over the fingers was dispensed with and replaced with a single crease following the leading edge of the metacarpal and extending around the thumb. 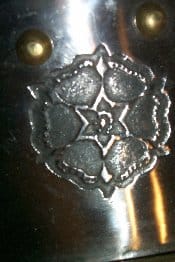 They are additionally adorned with a rose etched into each metacarpal, and by a line of large brass rivets extending around the edge of the cuff. The gloves are of the highest quality black deerskin, and a large brass bracelent defines the wrist joint.

Personally, I find fighting in finger gauntlets a rare luxury. Years ago they were completely legal within the parameters of SCA fighting, since the protection provided is very similar to the hockey glove standard. Current SCA regulations do not allow their use without a waiver or extra protection. Some combatants have sought a waiver from the Kingdom Earl Marshal, while others have opted to use small, circular “finger bucklers” over the fingers when fighting with two-handed weapons. Swept hilts are usual for broadsword use.