Living at Home After College

In the wake of the COVID-19 pandemic, everyone was hit with a curveball. For many young people, this meant moving back home with their parents for a number of different reasons. Upon surveying 406 people living with their parents, we tackled the questions as to why they were and how recently they’d moved back in.

Staying with parents comes with its fair share of ups and downs – what are respondents’ financial and employment situations, and how has their emotional and mental well-being been hindered by the at-home experience? On the other hand, we’ll look into some of the reasons young adults are staying at home longer than they used to. Lastly, we’ll find out how respondents think they will stack up to their parents as they enter adulthood and start a life of their own.

Back to Where It All Began

The two most common reasons for youngsters to live with their families, without a spouse or partner, was to save money (aside from college and medical bills) and to simply spend time with their folks. A large portion of respondents across generations who were currently living with family – 68.2% of Gen Z, 59.6% of millennials, and even 61.1% of Gen X – said this was due to, in some capacity, the global pandemic. Since classes have become remote, 8.3% of respondents attributed this as the reason why they moved back home from campus. 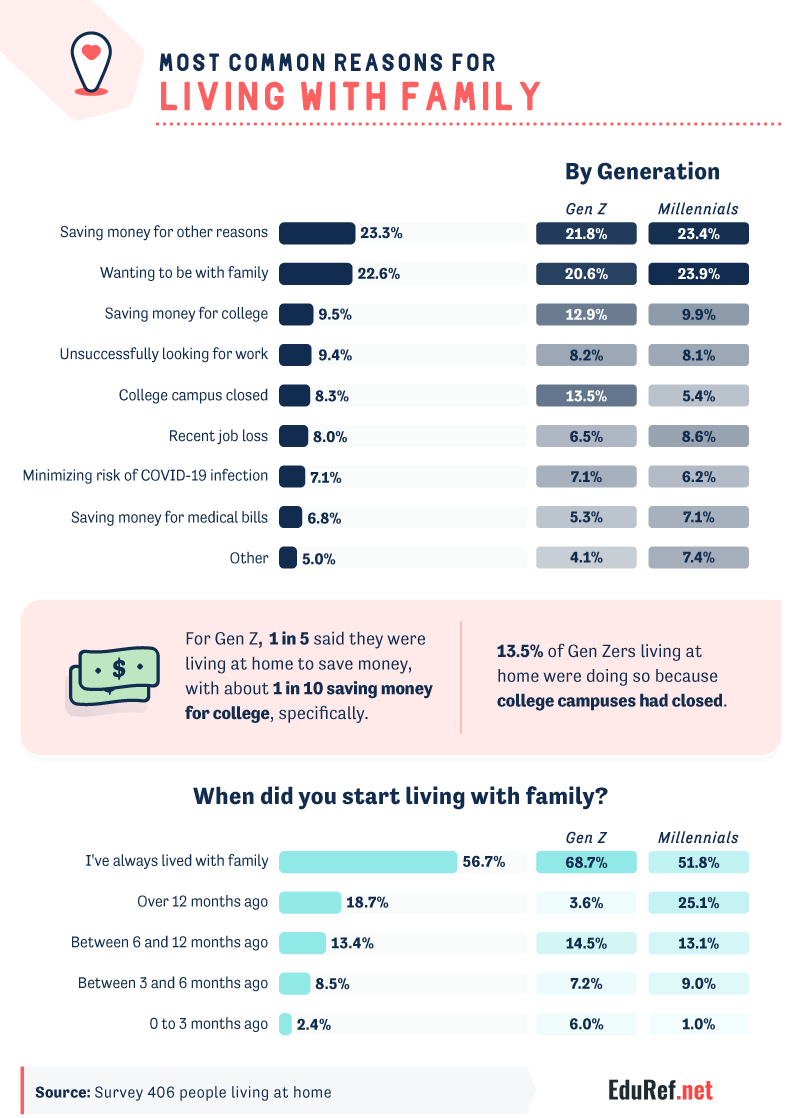 When asked when they started to live with their family again, nearly 57% of respondents said they had never moved out in the first place. Just under 19% moved back over a year ago, and the numbers began to dwindle the more recent the timeline. Many young adults have admitted to feeling slightly uneasy about moving back home – some feel like their life has been put on pause, while others start to notice they’re falling back into old, uncomfortable habits. For many, it’s far from an ideal situation.

Other stressors that respondents had been dealing with are their financial concerns and employment situations. Just under 60% were worried about earning enough income to sustain themselves, and 48.6% were losing sleep over securing a well-paying job. Over a third were also concerned with student loans and credit card debt, and nearly as many fretted over making enough money to support their family.

Many others got by from side hustles, gig work, and part-time jobs, but a considerable amount of respondents were unemployed – overall, an estimated 225 million jobs were lost worldwide due to the global pandemic in 2020.

Even if employed on a full-time basis, over half of respondents felt moderately anxious about their financials, and 42.5% of Gen Xers living with family said their primary financial concern was student loan debt. On a positive note for Gen Zers, millennials, and Gen Xers, at least half of each generation reported working in their field of study or professional area of interest.

Revisiting the previous point about the uneasiness of living at home, let’s take a look at the aspects that have either helped or hindered respondents. For Gen Z and millennials, the majority felt as if their financial well-being and possibility of future successes had improved while under their parents’ roof, but most felt no change regarding their future career path. 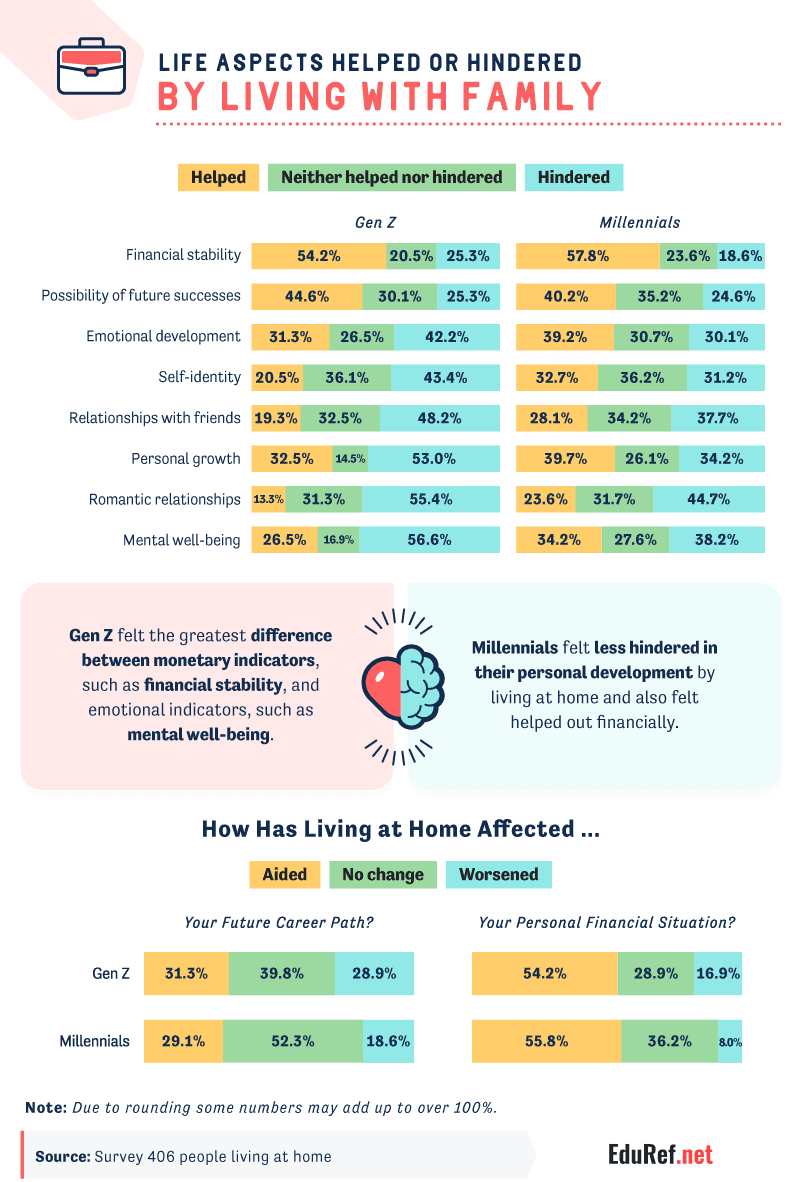 Unfortunately, the luck started to run out after that, as other facets of respondents’ lives seemed to have taken a turn for the worse. Gen Zers in particular struggled a lot with their personal growth, romantic relationships, and mental well-being. According to the American Psychological Association’s 2020 Stress in America Survey, more than 7 in 10 Gen Z adults said they had experienced common symptoms of depression at some point in the two weeks prior to the survey.

When asked if they thought they would live a more successful life than their parents, about a third of Gen Zers and millennials felt very optimistic about the possibility of that happening. Overall, though, 21.1% of respondents felt they would not do better in life than their parents had. Millennials, in particular, have been dealt a difficult hand regarding the economic landscape surrounding them. Rising house prices and an increase in average student loan debt are a couple reasons why young people might feel pessimistic when comparing their potential future success to that of their parents. 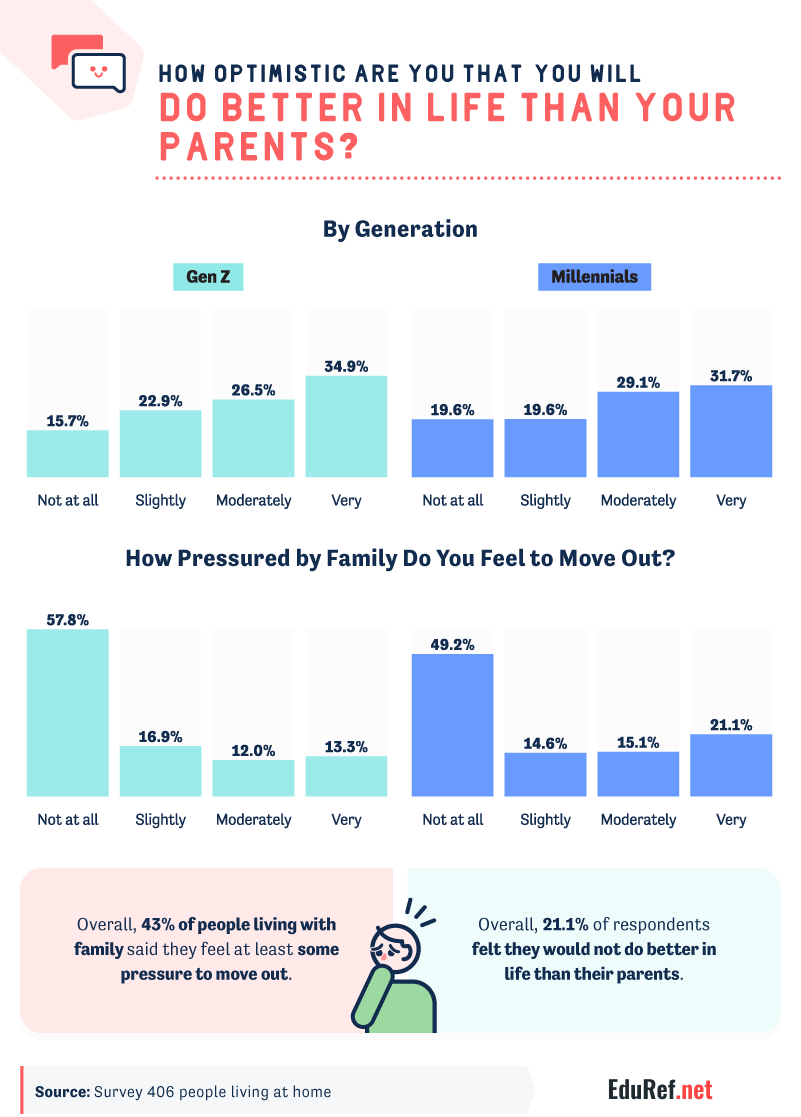 That being said, the majority of them felt no pressure at all to move out of the family home. Living at home is an effective way to decrease living expenses, pay off debts, and attempt to save money. Aside from the financial aspect, there is generally less personal responsibility living with your parents, and data shows that younger generations have been delaying two big steps into the world of adulthood: marriage and parenthood. For some, staying home may be worth the emotional turmoil after all.

With the global pandemic disrupting lots of our plans, many found themselves moving back into their parents’ place. The financial benefits of living at home was one of the main reasons young adults decided to do so, and many figured there were generally enough reasons to stay – even though having their own place might be healthier for them. Either way, parents have tons of knowledge and life lessons that can prepare their children for eventual independence – valuable tips include pursuing what you love, learning from mistakes, and always doing your best work.

Arguably the most important aspect of a child’s development, though, is their schooling. Especially in today’s online learning climate, it’s important to have access to the necessary tools in order to plan your educational career accordingly. At EduRef.net, a wide array of student resources are available, including a platform that can match your degree level, field of study, and major to an online program tailored to your exact learning path. Head over now to see the different opportunities that await you.

We collected 406 responses of Americans living at home from Prolific. 41% of our participants identified as men, 57% identified as women, less than 1% identified as nonbinary or nonconforming, and about 1% chose not to disclose their gender. Participants ranged in age from 19 to 76 with a mean of 35 and a standard deviation of 12.6. Those who reported living with a spouse or partner, cohabitating with roommates, or who failed an attention-check question were disqualified.

The sample size of Generation Z and millennials was 283 people, or 70% of our overall sample. It is possible that with more of these participants, we could have gained more insight into this population.

The data we are presenting rely on self-report. There are many issues with self-reported data. These issues include, but are not limited to, the following: selective memory, telescoping, attribution, and exaggeration. No statistical testing was performed, so the claims listed above are based on means alone. As such, this content is purely exploratory, and future research should approach this topic in a more rigorous way.

Know someone living with their parents who might get a kick out of this article? Feel free to send it their way or to any other friends and family. We just ask that you do so for noncommercial use only and to please provide a link back to the article page so the contributors can earn credit for their work.