Best Colleges and Universities in Georgia 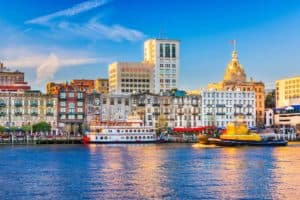 Number of
4-year colleges in Georgia

Emory University is one of the world’s leading research universities. Its mission is to create, preserve, teach, and apply knowledge in the service of humanity.

Georgia Tech (Georgia Institute of Technology) is a technology-focused college in Atlanta, Ga, and one of the top research universities in the USA.

The University of Georgia, a land-grant and sea-grant university with statewide commitments and responsibilities, is the state’s oldest, most comprehensive, and most diversified institution of higher education. For over 230 years, we’ve been committed to teaching, serving, and inquiring into the nature of things.

Mercer University is one of America’s best colleges, with programs from undergraduate liberal arts to graduate, doctoral-level degrees in Georgia and online.

Georgia State University, an enterprising public research university in the heart of Atlanta, is a national leader in graduating students from diverse backgrounds. Its location in downtown Atlanta provides its more than 32,000 students with unsurpassed connections to the city’s business, government, nonprofit and cultural communities as well as opportunities in an environment of varied ideas, cultures, ages, lifestyles and experiences. Atlanta, home to more than a dozen headquarters of Fortune 500 companies, provides Georgia State’s faculty with an urban laboratory, enabling them to draw creative inspiration and address critical societal issues locally and in cities around the world. Georgia State has a university-wide commitment to student advising and attention to student progress to graduation. The university is nationally recognized as a leader in creating innovative approaches that foster the success of students from all academic, socio-economic, racial and ethnic backgrounds. Georgia State is one of a handful of large institutions nationwide using new technology to track students from the moment they arrive on campus until they graduate to ensure progress. With the university’s early warning tracking system, struggling students get the intervention they need to get back on track, improve or change their academic path. Georgia State is among the most diverse universities in the nation and is a recognized leader in graduating students from diverse socio-economic, racial and ethnic backgrounds. The university’s 10-year strategic plan, introduced in 2011, aims to enhance research and discovery, in part by implementing a five–year hiring initiative to build scholarly strength around interdisciplinary research themes. It also focuses on efforts to make the university a leader in undergraduate student success and puts renewed emphasis on improving graduate education. The plan emphasizes the university’s commitment to addressing issues and problems confronting cities around the globe, and establishes as a priority the institution’s initiatives to extend its global involvement and influence. Georgia State, founded in 1913 and celebrating its centennial in 2013, is central to the revitalization of downtown Atlanta, expanding its campus and building a more robust student residential community. More than 4,000 students now live in residence halls on a campus that once served commuting students exclusively. Its efforts to enhance student life and campus involvement included the introduction of a Division 1 football program in 2010 and membership in the Sun Belt athletic conference of the NCAA’s Football Bowl Subdivision in 2013. The university offers 55 undergraduate and graduate degree programs in more than 250 fields of study in its eight academic colleges and schools, the Andrew Young School of Policy Studies, the Byrdine F. Lewis School of Nursing and Health Professions, the College of Arts and Sciences, the College of Education, the College of Law and the J. Mack Robinson College of Business. Its recently established Honors College attracts students with outstanding academic credentials. Source

The Best Colleges rankings show the top 5-10 colleges and universities in a given state. These universities have been chosen based on US News’ 2020 Best Colleges Rankings which are based on factors such as graduation and retention rates, social mobility, expert opinion, undergraduate academic reputation, student excellence, student’s academic experience, student selectivity, alumni giving rate, faculty resources, and financial resources. Read more about Us News’ ranking methodology here.